In glittering Newport, Rhode Island, status is everything. But despite being a poorer relation to the venerable Vanderbilts, Emma Cross has shaped her own identity—as a reporter and a sleuth.

As the nineteenth century draws to a close, Fancies and Fashion reporter Emma Cross is sent by the Newport Observer to cover an elite house party at Rough Point, a “cottage” owned by her distant cousin Frederick Vanderbilt that has been rented as an artist retreat. To her surprise, the illustrious guests include her estranged Bohemian parents—recently returned from Europe—as well as a variety of notable artists, including author Edith Wharton.

But when one of the artists is discovered dead at the bottom of a cliff, Rough Point becomes anything but a house of mirth. After a second murder, no one is above suspicion—including Emma’s parents. As Newport police detective Jesse Whyte searches for a killer, Emma tries to draw her own conclusions—with the help of Mrs. Wharton. But with so many sketchy suspects, she’ll need to canvas the crime scenes carefully, before the cunning culprit takes her out of the picture next . . .

Praise for Alyssa Maxwell and her Gilded Newport Mysteries

“Another entertaining entry in this cozy series.” —Library Journal on Murder at Beechwood 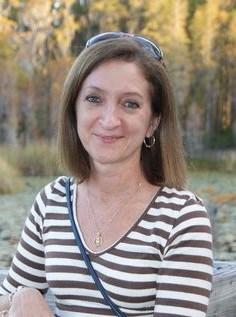 Alyssa Maxwell has worked in publishing as an assistant editor and a ghost writer, but knew from an early age that being a novelist was what she wanted most. Growing up in New England and traveling to Great Britain fueled a passion for history, while a love of puzzles of all kinds drew her to the mystery genre. She lives in South Florida in the current year, but confesses to spending most of her time in the Victorian, Edwardian, and post WWI eras. In addition to fantasizing about wearing Worth gowns while strolling manor house gardens, she loves to watch BBC and other period productions and sip tea in the afternoons.

FTC Disclosure: I received a free Netgalley of this book from the author/publisher in exchange for an honest review.

My thoughts:  It’s really simple. I loved this book. Murder at Rough Point is the the 4th book in the Gilded Newport series and I’m ashamed to say that this is the first time I’ve heard of this seres. I don’t know how I missed this one, but rest assured, I will be going back and reading the first three books.  If you enjoy mysteries with a bit of history, Murder at Rough Point is a good match for you.

This story had a classic Agatha Christie flavor to it: an eccentric group of characters essentially isolated, leaving a small pool of suspects. It reminded me of Christie’s And Then There Were None. However, Maxwell gave it her own twist. Murder at Rough Point is a delightful read.

Even though the suspect pool was rather shallow, the author had me guessing through out the story. The author paints a story that keeps the reader engaged to the end. I love historical mysteries, especially when they include real people, particularly real people from America’s gilded age. Of course those stories usually have me running to the computer and putting my librarian degree to use in order to figure what is real and what is made up.

Maxwell is quite skilled at creating a tightly woven mystery. I did not want to put this story down and return to reality. Now, I’m hoping for an early snow day so I can have a day off from school so I can dive into the previous books in the series. Though Murder at Rough Point is the fourth book in the series, you can read it as a stand-alone. There are some references to previous stories, but nothing that will keep you from enjoying this book. I do believe that you will enjoy the story and Emma so much so that if this is your first Gilded Newport mystery, you will want to go back and read the others simply because they are bound to be a good read.

September 18 – Cozy Up With Kathy – REVIEW

September 20 – View from the Birdhouse – SPOTLIGHT

Posted by bevarcher on September 12, 2016 in Uncategorized